Gallery Talk: From the Artist, Saturday, October 20, 2018 |  2 pm | Tubbs Gallery
As an artist who did not personally experience  American life in the 1930s and ’40s – his lifelong fascination, Mr. Hoff will discuss the artistic process behind creating  the imagery and narratives found in his work.

My drawings provide a pictorial narrative of life in America during the 1930s and ‘40s. In capturing the essence of life on the “home front”, I depict popular architectural and social icons of that era to create scenes of places where Americans gathered to pursuethe fine art of having fun. Architecture and light play key roles in my work and two major influences have had a most profound effect on the use of these elements in my drawings. The first was Edward Hopper, an artist in whose work architecture played a prominent role. Hopper used buildings as well as light to distill the essence of what is American and the success of his work showed me the legitimacy of depicting the urban landscape. The second influence arose when I became familiar with Life magazines from the forties. The light in their photos seems ethereal and yet ready to burst off the page with great warmth and an intensity which I have come to associate with that time even though I know it was probably due to more primitive photo materials. Born too late to have truly experienced the 1940s, I instead rely on written and verbalstories and imagery gathered from extensive photo files. I then create visual folktales to illustrate the style and romance which withstood the brutality of a world war to influence us even today in music, literature, fashion and the theatre.

I prefer to work in graphite because I realize how appropriate it is for illustrating an era whose photographic and cinematic imagery were predominantly in black and white. Also, the wonderful tactile relationship between pencil and paper enables me to intimately connect with the creative process. In the future I intend to continue refining my technique. I feel this will evolve through a combination of diligence and the process of growing older and acquiring, I hope,greater wisdom. I have also begun to take a less literal approach to my subject matter with the goal of enabling the viewer to subconsciously participate to a greater degree in the process of communication. The making of each drawing reveals a little bit more to me about the medium, the little bit more it will take to complete the next drawing.

A graduate of the Maryland Institute College of Art, Richard Chandler Hoff is a nationally recognized artist working exclusively in graphite pencil on paper. Hoff illustrates life in America during the 1940s relying on extensive research to accurately depict that decade. At the age of twenty-eight Hoff’s work was reviewed in the French arts magazine La Revue Moderne. In 1987 Richard was awarded Second Place in the American Artist Magazine Golden Anniversary Traveling Exhibition. Only 68 artists were chosen from 13,000 entries. Hoff’s work has been included in the prestigious Pennsylvania Art of the State competition for seven years and he is represented in public, corporate and private collections including the Butler Institute of American Art and MBNA Bank (now Bank America). In 2015 he was awarded Master Pencil Artist (signature) Status by the Pencil Arts Society of Canada. He is a winner of the Williams Prize in drawing (Juror’s Choice Award) for 2016. Hoff’s drawings have been featured in American Artist Magazine and the premier issue of Drawing magazine.

Richard currently resides in Felton, Pennsylvania with his wife Joanne and Ginger, the Studio Cat. 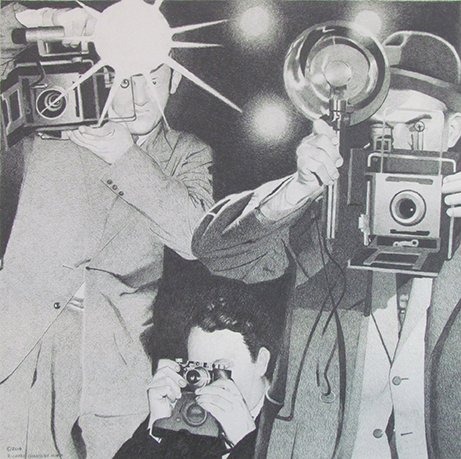