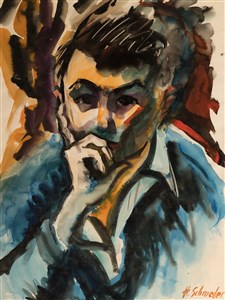 This year marks the Rehoboth Art League’s 85th Anniversary.  As part of its year-long celebration, RAL will highlight several special groups that formed in the League’s early years and are still active today.  The first being the Howard Schroeder Sketch Group.

In 1949, Howard Schroeder started the Open Studio Sketch Group to give artists an opportunity to gather once a week to sketch or paint live models, an idea inspired by a group he had belonged to as an artist in New York City, his birthplace. This group, which continues to this day, has been an outlet for artists to practice their skills in drawing and painting.  The group meets once a week on Thursday evenings throughout the year and a live model is hired for each session.  The Sketch Group is not only a place for artists to develop their skills but also a place to share ideas and help one another. Schroeder was an active member of the Open Studio Sketch Group for decades and his participation is evident in his growth as an artist. It has since been renamed the Howard Schroeder Sketch Group. This special exhibit will showcase the artwork of several of it’s current participating artists along with selected work by Howard Schroeder that were created during the open studio sessions.